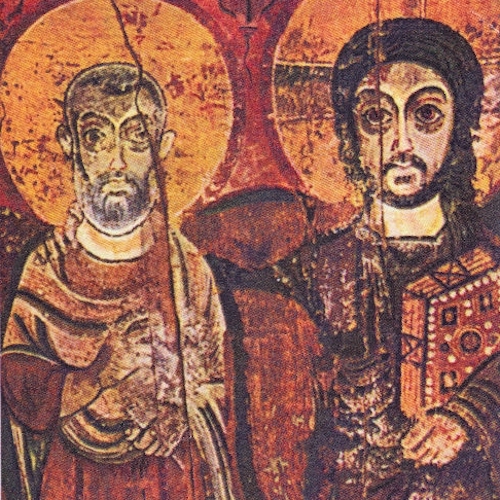 Thanksgiving for Friends by Nicola Slee

These, these are the ones who have walked with me

where no others would come.

These are the ones who have not refused to look upon me.

These are the ones who have come near.

These are the ones who have shown me your face.

These are the ones who have touched me with your nearness.

These are the ones who have incarnated your justice.

These are the ones who have mediated your presence.

That prayer for friendship strikes me as being reminiscent of Jesus’ friendship with Lazarus, Martha and Mary, who we meet in the Gospel passage. And in some ways I think they give us a way of being followers of Jesus, showing us what friendship with Jesus can mean. In particular, in the theme we have been following in the Lent sermons, in prayer.

Now today is the beginning of Passiontide, the two weeks that lead up to Good Friday and Easter Sunday. It focuses our attention towards what is to come, and in today’s Gospel reading we have the passage which is immediately before the entry into Jerusalem on the donkey, which we will celebrate next week. But it also follows the lengthy story of the resurrection of Lazarus, where Jesus first delays coming and then arrives after his friend has been dead for four days. And in that story we also meet Martha and Mary, both of whom interact with Jesus in a way which has more a feel of equals, of being his followers as much as any of the disciples. Which is very unusual for a Rabbi in the first century, to be that close to two, probably unmarried, women. When they speak to him, Martha says: “Lord, if you had been here, my brother would not have died. But even now I know that God will give you whatever you ask of him.” And Mary also says: “Lord, if you had been here my brother would not have died.” Both of which are pretty presumptuous in their first century context.

So, how do we pray? From the example of Martha and Mary, I’d suggest that one possible response is, with absolute honesty and straightforwardness. These two women are exemplars of faith, they don’t qualify what they say, they aren’t careful with their words. They are direct and genuine. So, maybe when we pray we need to say it as it is. No matter how painful, how direct, how possibly blaming of God.

And what happens when we come to the passage we had read? In the flow of the Gospel we are almost immediately after that resurrection of Lazarus. Jesus’ three friends have invited him, and his disciples, for a meal, possibly a banquet, and chances are most others from their immediate community are involved too. So, it could be quite sizeable. And the Passover is close, the festival is a time when people came from all over the country, and the message has gone out, if anyone knows where Jesus is to let the authorities know so that they can arrest him. So, in the background is this threat to Jesus’ life.

But here he is with his friends, Lazarus, Martha, Mary.

We are only a couple of miles from Jerusalem in Bethany. I wonder if this is a risky thing to be doing? Are they sitting wondering whether there might be a knock on the door, an arrest party coming for Jesus?

Martha does what she seems to do so well, serving the food. Lazarus is at the table, probably next to Jesus, maybe even his head resting on Jesus?

And then Mary comes with extravagance. She brings a pound of pure nard, or spikenard. We learn from Judas that it could be sold for three hundred denarii. A day’s wage was one denarius. This pound of nard therefore cost about a year’s pay! No wonder Judas looks at it and wonders what it might add to their coffers.

And this is pure nard, it’s not been added to, to make it go further. It’s come all the way from India, it’s a complete extravagance.

Mary has just had her beloved brother come back from the dead, and we can imagine she is completely grateful to Jesus. It maybe something which she’s had for some time.

And, she uses it now. She has it in a jar, and at that price, it’s probably in a good jar. Then it’s like a complete outpouring of her affection, it’s like getting lost in love. She’s wiping his feet with her hair, she’s anointing his feet. This is beyond what’s normal. If you were a guest at a banquet, you might expect the servants to wash your feet with water, and if you were an esteemed guest someone might anoint your head with some oil. And nard was used by the Romans for anointing people’s heads. It’s described as a ‘rich rose red and very sweetly scented.’ It’s also very improper to be doing this during the meal, and Mary is presumably unmarried, so this is an unmarried woman, letting her hair down, literally, to wipe his feet with this most expensive of luxury perfumes, during the meal, and to an unmarried Rabbi. That carries all sorts of connotations in first century minds.

And, there are all sorts of other resonances here. In the previous chapter there’s reference to the stench that would be in the grave where Lazarus had been buried, and now we have a perfume which probably fills the house. Jesus refers to the idea that she’s anointing for his burial. Lazarus raised to life, Jesus under threat, fear in the background. Who knew what as going to happen at the Passover? And there’s reminiscences in the text with Jesus washing his disciples’ feet within a few days. And also, with the immediate entry into Jerusalem about to follow, the implication of anointing a King?

Mary pours out herself and this perfume completely. There’s nothing held back. Even in these dark times.  Following Jesus can mean giving, serving, being with.

What does this all say about prayer?

Well, earlier we have the direct, honesty of Martha and Mary earlier. Speaking it to God as it is. Not holding back, no matter how challenging.

And now, at the meal, we have Martha working hard, and by contrast to another passage there’s no implied criticism of her here. Prayer can be in action, working, serving. Maybe in my activities I can see them as prayer, of prayer in action, service to others, whatever I’m doing.

And Lazarus? Well he’s probably lying next to Jesus, very much as the beloved disciple is described as doing at the Last Supper. There’s an intimacy, a closeness, a friendship. Maybe prayer can also be that. Simply being with Jesus? To imagine as I sit at the kitchen table, my office desk, my comfy armchair, that Jesus is sitting opposite and I can simply have a conversation with him, watching how he is in front of me, maybe imagining what he might say to me?

And Mary? It might be that we may find we are doing something irrational in our prayer, or our friendship with Jesus. She uses this expensive perfume and lavishes it on this person she adores. Maybe we might find this too, an adoration, a getting lost in love, even in difficult times such as the one they were in. Maybe something happens for us, like it did for Mary with Lazarus’ resurrection, and suddenly all that we had been saving for the future, now makes sense being poured out now.

In the light of Passiontide, we have almost a fortnight’s approach to the cross, there’s the entry into Jerusalem, there’s all the events of passion week itself, there’s Maundy Thursday, Good Friday. Before finally arriving at Easter day. These weeks are a journey, a pilgrimage, and they can be a pilgrimage of prayer, perhaps by reading through the Gospel story, or we might find it in the services of holy week. Or we might find it in our day to day lives. And we might notice, as we feel that approach to Easter day, that whatever is going on in our lives, God is there with us through all of it.

through the journey of my days:

its restings and its travellings,

its leavings and its arrivings,

its adventuring and its homecomings,

that the pilgrimage of my life

may unfold your trustworthy faithfulness