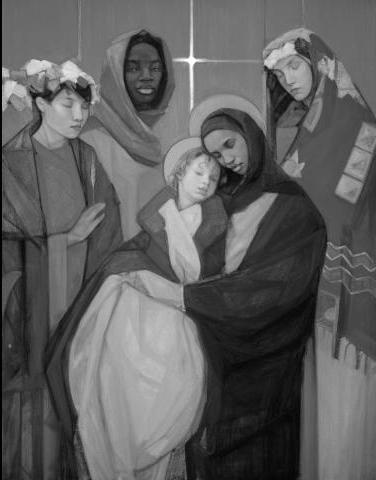 Being cast in the role of Mary for a School Nativity
Play has been seen as one of the first great rites of
passage for a girl of infant age. Hotly contested and
the subject of tears for disappointed ‘wannabes’
this early experience of a traditional telling of the
Christmas story establishes its gender specific
casting at a very young age. (I remember playing a
rather hesitant Joseph at the age of seven – but
perhaps hesitancy was a faithful reading of the
text!)
But is the Nativity quite as Gender normative as this
early experience suggests? This Gender themed
edition of Connections got me thinking about this
question, and I offer the fruits of my reflections. My
conclusion is that there is plenty in the gospels’
telling of the Nativity that subverts gender
stereotypes.
I’ve already begun with Mary – a biblical character
that Christian tradition has covered with many
layers of images and assumptions, such as ideal
models of motherhood, purity and virginity. The
Biblical accounts, sparing in detail, suggest a rather
more interestingly subversive picture. As a young
unmarried and childless woman Mary would have
been a person of little status. ‘Virginity’ was
shorthand for this lack of status. Only marriage and
motherhood could resolve this lack of status. Mary’s
designation as virgin and mother undermines the
whole patriarchal basis of female identity – as Mary
celebrates in the Magnificat God raises up the lowly.
All of this leaves Joseph with a gender related crisis;
and only the word of an androgynous angel enables
him to overcome the fear of the resulting disgrace.
The Holy Family are, from the outset, far from any
conventional kinship unit; a fact further stretched by Jesus when he asks ‘who are my mother and brother and sister?’ (Matthew 12.48)

Other characters in the Nativity have assumed
genders in art and pageant, but not in biblical text.
Most interestingly it has been argued that the Magi
are unspecified in both gender and number (not 3
Kings!) and could have included women as well as
men in their number. It seems likely that Magi –
Zoroastrian priests – were male and female in the
Persian empire until after the birth of Islam; and so it
is at least possible that the visitors from the East
portrayed in Matthew’s gospel included female Magi.
Biblical wisdom traditions personify divine wisdom in
feminine terms, so we can see a natural set of
associations, and the subversion of male
assumptions of wisdom and power.
At the heart of the Nativity is the baby – the word
made flesh who dwelt among us full of grace and
truth (John 1.14) While Jesus’ flesh was male the
gospels recount a multitude of ways in which, for us
and for our salvation, he subverted all kinds of human
cultural constructs including those based on gender.
Full of grace and truth he frees us still to live and
relate and worship. The nativity begins the story of
the one in whom there is neither male nor female
(Galatians 3.28) Our primary identity is about being
‘in him’ and heirs of promise.

This is the a-genda of Christmas!
David Stephenson