We are a liberal and welcoming congregation which means we believe that God is present in all creation; we celebrate different faith journeys and the diversity of human identities, including LGBTQIA.  We are proud to be part of the Inclusive Church Network which means we do not discriminate on grounds of economic power, gender, mental health, physical ability, race or sexuality.  Whoever you are, however you feel about faith, and however much or little you want to engage, you are welcome at Cotham.

We are committed to social and environmental justice, both here and in the developing world.  We maintain an active programme of community giving and eco activism, whilst resourcing as much community and individual action as we can.  We have a Benefice Eco Group that meets regularly. We also have a NetZero by 2030 group. We have campaigned for the Jubilee Debt campaign and various members of the congregation are involved with organisations helping refugees, the homeless and rights for Palestinians. We are committed to the A Rocha Eco Church award scheme, and are nearly at the Silver Award level.

Each winter we are involved with supporting the Bristol Churches Winter Night Shelter through hospitality and friendship. During the month of May we are involved in a Saturday soup run with our sister church, St Paul’s, where we serve soup and sandwiches to homeless people and Big Issue sellers. Also with our sister church various people volunteer at the Make Lunch project at St Luke’s, Barton Hill, where children can get hot meals and enjoy activities during school holidays.

Our long-established Charity of the Month programme means we support (with prayer, 10% of the month’s giving and often, parishioner support) a diverse list of local, national and international charities.  Nominated charities have ranged from Night Stop to Musicians Without Borders. We also have an emergency fund for one-off donations for humanitarian crises.

As a congregation we are keen supporters of the work of Christian Aid and have an annual simple lunch and a joint flea market with our sister church, St Paul’s, to raise funds. Many members of the congregation contribute to Chernobyl Children’s Lifeline, which supports children and their families in Belarus and the Ukraine affected by the aftermath of the Chernobyl nuclear disaster. At Cotham we know that “to make is to pray”.  When we make things we deepen our awareness of our creator God and open ourselves to the inner and outer changes that He is forming in our lives.  So at Cotham we love to make things, and have regular art groups and workshops in which people of all ages, abilities and faiths, make things together.  You’d be welcome to join us and you’ll find more details on our Groups page.

We offer children and young people a loving space in which to create, explore, question and grow in the Christian faith, in their own way, so that they can live with grace in the world.

Early Foundations – a monthly gathering at 9.30am on Sunday for pre-schoolers and younger children and their grown-ups. Breakfast, creative story telling, music and space to connect with other families We have a beautiful building  which was designed by William Butterfield, a leading Victorian architect, in 1842.  We are located at the top of St Michael’s Hill, a high point in Bristol, and on the boundary of the medieval city.  There are two good sized halls, a decent kitchen and a car park which together make Cotham a great place to host parties, classes and community events.

Our building houses a martyrs’ memorial, a carving by Eric Gill and a war memorial.

The war memorial from St Saviour’s Church (which used to be part of our parish) has been restored and installed high up in the south gallery – the only wall large enough to accommodate it.  It is a fine piece of wood carving and available for view most weekdays between 9.30 and 11.30am. 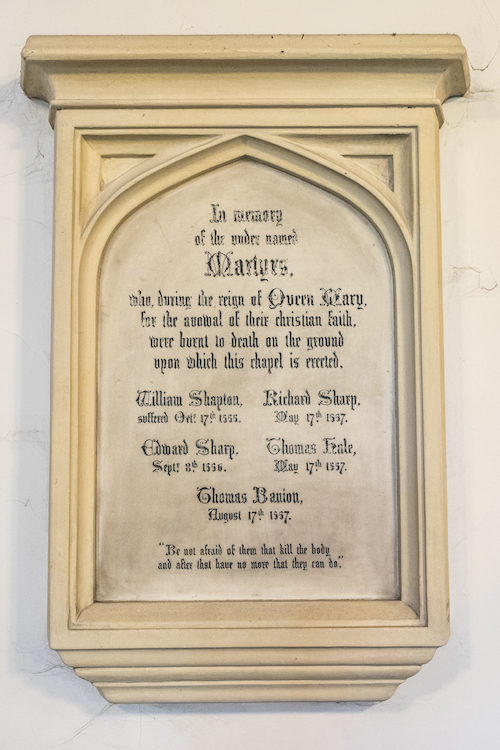 The Highbury Chapel, a Nonconformist place of worship which was built in 1842, lay vacant in the 1970s; two Anglican congregations from St Saviour’s, Woolcott Park and St Mary’s, Tyndall’s Park came together in the building in 1976. There are two memorial tablets to five martyrs erected by the Nonconformists – one inside the church and one on the exterior wall.  The martyrs were burnt to death during the 1550s in the reign of Queen Mary, on the spot where the chapel was built. They were referred to as ‘five poor men of Bristol’ and ‘who, for conscience sake, were willing to lay down their lives’.

There is also a memorial to Henry Arnold Thomas, a pastor of the Nonconformist church for 47 years, carved by Eric Gill. This was commissioned by the elders of the chapel because of Eric Gill’s connection with the Wills family, who were some of the original trustees of the church. The sculpture is of a Shepherd with three lambs under a canopy, with an inscription beneath also carved by Eric Gill, to the memory of Henry Thomas who was described thus: ‘Great grace was upon him’. Cotham Parish Church is part of a benefice.  Our sister church, with whom we share clergy and administrative support, is St Paul’s Clifton.  We’re enriched by this partnership, hold regular benefice Eucharists, and get together for shared interest groups, workshops, parties and children’s events. For example, every winter we join together to support the Bristol Churches Winter Night Shelter and every September we hold a Benefice Retreat at the beautiful Llangasty Retreat Centre in Wales.  Most years we have a joint Away Day Retreat together. Whether you are well-established in the Christian faith, feeling called to a new expression of your faith, or teetering on the edge of any faith, we hope you will find resources, inspiration and good company here with us.

Cotham Parish Church is a registered charity in England & Wales (no. 1132307)