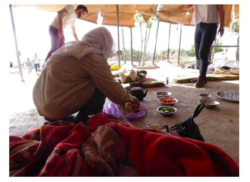 We were summoned quite suddenly – as is usual in these circumstances. The day before there had been multiple military vehicles, soldiers, border police and the Israeli Civil Administration, assessing, measuring, reporting. A group of settlers had been noticed gathering on a by-road as if to see what was going to happen. More uncertainty than usual was in the air. “Can you come tonight? We need a large group of internationals here at once. We are sure that they will carry out the demolition early tomorrow.” It is usual for house demolitions to be carried out very early in the morning. The army begins by blocking the approach roads to prevent supporters from entering and so it is imperative for them to arrive the night before.
It would of course make more sense and make for a more orderly account of my three months in Hebron with Christian Peacemaker Teams if I had begun with some words about the area perhaps, or the work of CPTs or the sights and smells of the Old Market where the CPT house resides, but life is not orderly here – it is full of unpredictability, tension and sometimes, danger, reflecting the daily life that is lived by the Palestinian community in which we are embedded.

The village of Um al Khair which had sent out the distress call to all the international Human Rights Groups working here is situated in the South Hebron Hills. Three of us had been delegated to respond and we quickly packed a bag. A taxi was called. We hurtled along the twisty roads by the light of a full moon arriving about 10pm and we joined other groups of internationals sitting on cushions in a large tent near the entrance to the village. It materialised that the lawyer who represented this little Bedouin village had failed to observe a deadline by which certain papers had had to be filed and as a result, a large number of houses in the village were under imminent threat of demolition.
Despite the lateness of the hour, platefuls of rice and vegetables were soon brought, followed by chai – hot, sweet tea in small glass containers. It was indeed a feast but more than the food, it was the warmth and gratitude of the welcome and the friendly and energised discourse between the internationals that was the real feast.

We settled down for some sleep around 2am, dividing ourselves into two groups and sleeping in different parts of the village so as more easily to hear the approach of army trucks and bulldozers. An early patrol drove around the village at 4am but all was quiet and the rest of us dozed on till 6am. These Bedouin villages are severely short of water, so “washing” was confined to smearing a trickle of water from the huge black tank onto my flannel and doing the best I could with it! But soon breakfast arrived, served by the village leader’s uncle – a glorious man and an elder of the village who remembered his family and neighbours being evicted from the Negev in 1948 and settling in the South Hebron Hills for the price of a hundred camels! And now they are again threatened with eviction.

After breakfast, we waited around fearfully till nearly 10am until the village leader came and said that the army would not come now and we could go – but an eviction was still a strong possibility tomorrow so could we come back tonight! We did of course, and received the same grateful welcome and the same enormous feasts.
One week since I arrived here and so much has happened. House demolitions, as Jeff Halper, Founder of the Israeli Committee against House Demolitions often says, are the sharpest and cruellest of all Israel’s tools of oppression, for they are the demolition of home – the most basic necessity of every human being. They also proclaim the unwantedness of the Palestinian population in their ancestral homeland and the continuing intention to ensure that they are ethnically cleansed.

But 2 nights of little sleep in the open air means that the need for some sleep is now pressing!
More news soon!