Forgiveness for sinning against the earth – Catastrophic Man Made Climate Change 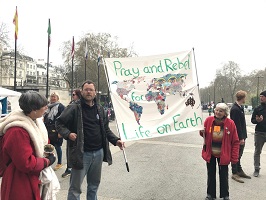 In 2015 Pope Francis described man’s destruction of the environment as a (collective) sin and accused mankind of turning the planet into a “polluted wasteland full of debris, desolation and filth”. He said the faithful should use the Holy Year of Mercy throughout 2016 to ask forgiveness for sins committed against the environment and our “selfish” system motivated by “profit at any price”. In addition he declared “Climate change is also contributing to the heart-rending refugee crisis. The world’s poor, though least responsible for climate change, are most vulnerable and already suffering its impact”. Or as former Arch-bishop Rowan William has put it “We are at war with ourselves when we are at war with our neighbour, whether that neighbour is human or non-human.”

We have just passed through the season of Lent and Easter. On Ash Wednesday when the ashes are drawn on the forehead, the priest may say “Turn away from sin and be faithful to the Gospel”. True Repentance, or metanoia, is more than being sorry for wrong doing. It’s about a whole ongoing change of heart and mind that moves us into action, sometimes to make reparation for the wrong done.

For me this particular call to climate change repentance and action came not from the church, but attending a talk last December given by Bristol members of Extinction Rebellion (abbreviated XR). This movement, set up in May 2018 in the UK, is becoming an international movement utilising civil disobedience to highlight climate breakdown, biodiversity loss, and the risk of human extinction and ecological collapse. This was in response to the 2nd Intergovernmental Panel on Climate Change (IPCC) special report on the impacts of global warming of 1.5 °C above pre-industrial levels and related global greenhouse gas emissions levels.
An open letter was written supporting XR from over 100 academics including Rowan Williams (the sole signee from the church). It includes the following stark statement: When a government wilfully abrogates its responsibility to protect its citizens from harm and to secure the future for generations to come, it has failed in its most essential duty of stewardship. The “social contract” has been broken, and it is therefore not only our right, but our moral duty to bypass the government’s inaction and flagrant dereliction of duty, and to rebel to defend life itself.

At some level most of us, including those in government and business in the UK and the world, are still in denial about the dangers and the call to action (indeed, some massively rich fossil fuel corporations are actively using PR to deny the dangers in a similar way that the tobacco industry once denied the health dangers of smoking). As individuals we expect someone else to rescue us. For Christians we may unconsciously expect this somebody to be God. As normally faithful law-abiding citizens, we can think the law breaking made by XR itself is sinful. However Holy Week that’s just passed, reminds us that Jesus himself was disobedient to both the Judaic and Roman law. The same is true of St Paul and many other saints and also people like Martin Luther King. We may sometimes need to choose between God and Caesar.
At present there are too few prophetic voices calling in the wilderness. Surely the church has a crucial part to play here, firstly prophetically providing a Christian narrative to recognise and respond? It can also assure us our ultimate hope lies in God who will create a new heaven and earth.

As it happened, Holy Week coincided with several climate related actions. Firstly, there was XR’s widely publicised action in disrupting streets in central London, in which two from the Benefice, Erica Wildgoose and Sue Parfitt were deeply involved (see photo). David also led a special ‘Climate Crisis Stations of the Cross’ with members of Christian Climate Action in London on the Tuesday. Appropriately enough on Maundy Thursday evening the BBC broadcast Sir David Attenborough’s new documentary – Climate Change: The Facts. “Right now we are facing our greatest threat in thousands of years. Climate change. At the current rate of warming we risk a devastating future,” Attenborough narrated.
15
The first day of protest also coincided with the terrible fire in Notre Dame Cathedral in Paris. There seemed to be a strange irony and poignancy in this, particularly in Holy Week. One French newspaper headline ran “No words can describe the pain”: Paris weeps for its beloved Notre-Dame.
If we can feel this about loss of cultural and religious heritage, how much more should we be lamenting the destruction that is already happening and the incalculable cost to ourselves and other species of not acting. Although some parts of the media are addressing XR’s challenge, they are still largely content to cover it as just another sensational story to sell to the public and ’business as normal’.

In the Benefice we have had conversations with several members of Extinction Rebellion. David has set up a ‘climate affinity group’ for those concerned or distressed by the threat of catastrophic climate change and to support action, including XR. If anyone feels they would like to join please contact David, Sue Par-fitt, Karen Sillence or myself.

There are vast amounts of climate action required, both individually and collectively. As individuals this involves assessing and making often hard choices about reducing our own carbon footprints. These can be choices ultimately between God and mammon. There’s also so much to be involved in locally. In response to the IPCC report, Bristol plans to become carbon neutral by 2030. This gives our city the most extraordinarily ambitious emissions targets of UK’s “core cities group”. One of their mottos sums it up here: “If not us, whom? In not now, when?” Also, thanks to initiatives by XR and Karen’s husband Colin, Bristol Univer-sity has declared a ‘climate emergency’. It’s the first in the world. Should we be pressurising the church to also declare such an emergency? Perhaps the ‘fifth mark of mission’ (to strive to safeguard the integrity of creation, and sustain and renew the life of the earth) should become the first?

Despite these initiatives, on the face of it, things in the long term are currently looking very bleak. It’s easy to remain in denial about this existential crisis, propel oneself into a frenzied panic or drift in to despairing acceptance (which itself can be considered a sin). However, as David reminded us recently in a sermon, the words of Mother Teresa “We can do no great things – only small things with great love.”