Male and Female Created He Them 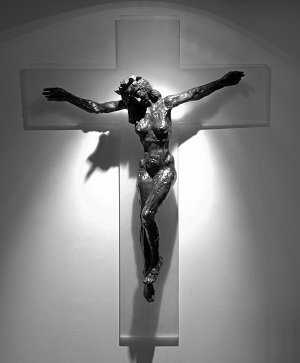 These words, from the first chapter of Genesis, are
a bit like the ominous tolling of a bell! Yet really,
gender should be irrelevant to Christianity, or at
least to God, who is ineffably beyond any such
concept, being essentially mystery, hidden in
darkness, as the unknown author of the medieval
text, The Cloud of Unknowing, thought.
However, Christ in his Incarnation necessarily took
on a gender, together with other human attributes.
Too often we allow gender issues to divide and
polarise the sexes, but Jesus would have none of
this. In his ministry, he treated everyone alike,
showing a compassionate interest in all. From the
beginning, both men and women have had key roles
to play in the foundation and spread of the Christian
faith.
Gender is restrictive when people feel trapped in
conventional gender roles. In today’s society such
boundaries are being severely scrutinised, to the
extent that it is now possible to change one’s
gender. This underlines how much Christ ran
counter to the cultural norms of his time, in his
breaking down of barriers relating to gender.
Gender is necessarily emphasised by the use of
language and this has been fiercely debated in
Christianity. Many women have been angered and
alienated by the persistent use of the masculine
pronoun. A helpful initiative here was the
consistent use of inclusive language, for example in
the NRSV Bible. For instance the word “humankind”
replaces “mankind.”
Some people feel that a male concept of God has
contributed to that pervasive image of God as a
stern, authoritarian judge which has bedevilled
generations of Christians and done great harm to
the Church. We do need to be aware, however, of
another danger, that of the gender-based
stereotype. Why in fact should a masculine concept
of God be stern and authoritarian in the first place?
Are all men like that? Are some women like that?
The difference is personality, not gender. But God
has got labelled with the stereotype.

Many Christians associate the Holy Spirit with a
“feminine” aspect of the Trinity. The Spirit is seen
as creative; qualities such as compassion and
intuition, together with the gifts of the Spirit: love,
joy, peace, patience, kindness, generosity,
faithfulness, gentleness and self-control – these
help to give a more rounded and encouraging
picture of an all-embracing God.
The most positive and attractive aspect of gender in
relation to Christianity that I can think of is
motherhood. It is suggested that Mary is mother to
all humanity. The prophecy of Simeon that a sword
would pierce her soul, her solidarity with the
suffering of her son, her presence at the foot of the
cross all demonstrate the love and the anguish, at
times, which are the essence, not of motherhood
only, but of parenthood.
The liturgy includes two lovely canticles on the
motherhood of Christ. From Julian of Norwich we
have: Christ came in our poor flesh to share a
mother’s care; and my personal favourite, from
Saint Anselm, the canticle beginning: Jesus, as a
mother you gather your people to you; you are
gentle with us as a mother with her children.
To conclude, I find gender a somewhat uneasy mix
with Christianity, but there are positive aspects
which can be deeply felt. I think we should try to
travel close by these on our earthly pilgrimage.