Masculine and feminine images of God 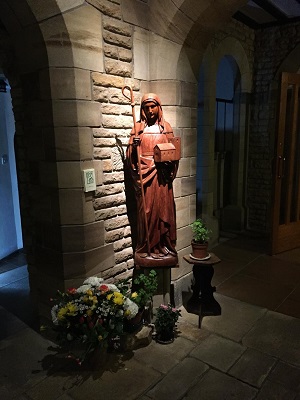 After reading an article that we should avoid only
calling God a ‘he’, discovering that the Church of
Sweden already have stopped calling God ‘he’ and
reminiscing on a pilgrimage we took with our old
church to Whitby on the theme of St. Hilda in
March, I recently began to look at women in
Christianity and the problems that the church has
with gender – against women and the transgender
community. Recent research shows that half of 18-
24 year-old Christians believe God to be male, with
just one in three over-65s believing the same, and
the ways in which we think or forget about women
such as Mary Magdalene, Jesus’ mother Mary, St
Hilda and all other Christian women can be quite
stereotypical. Though those identifying as
transgender can become priests within the Church
of England, there is little evidence right now that
there are actually any.

I believe that God and clergy are of the third gender
or non-gendered. This is an egalitarian or/and
Christian feminist view as it is including those of all
gender identity categories. God and Jesus are both
masculine and feminine – they may be male, they
can get angry (God against the Pharaohs or Jesus
entering the temple to expel the merchants and
money makers) but they are caring, loyal,
compassionate to people of all genders, ages,
abilities, economic status; characteristics which in
the past would have been viewed as feminine. One
must note that the labels of God and Jesus as
‘Father’ and ‘Son’ are analogous or metaphorical
and were used by male authors in patriarchal times.
The use of these words and the pronoun of ‘he’ does
not necessarily imply God as purely male. Priests are
also gender neutral in their role; they are leaders in
our churches, but they also care for us and our
community. They are masculine and feminine.