Networks of Grace and Life 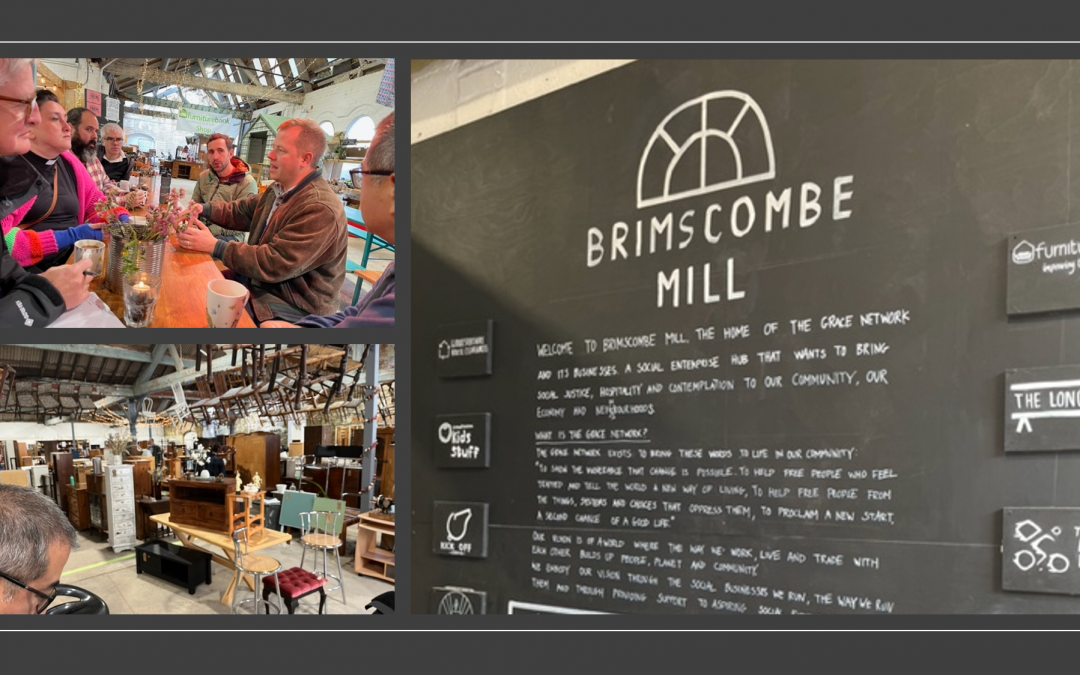 Recently a small group of us from the Benefice and Hazelnut visited The Grace Network a ‘missional social enterprise’ based near Stroud in some formerly redundant industrial units. The Grace Network has created a hub of thriving small businesses, mostly based around recycling and re-using, including a children’s toy and clothing store, a bike repair shop, a large reused furniture store, supported by a house clearance project, and at the heart, the pay what you can ‘Long Table Cafe’, and a kitchen that delivers quality frozen meals from the ‘Freezer of Love’.

The social enterprises and their employment patterns and practices were inspiring in their own right, with some wonderful stories of fragile lives finding new beginnings, and mutual support enabling those who may have been seen as ‘unfit’ for work to find a valued role and place. Additionally the enterprises are all low carbon, and deeply orientated towards justice and compassion. A community of friendship, co-operation and trust has grown around shared labour and common purpose.

What was even more inspiring was the way in which The Grace Network has grown up around values and practices best described as ‘New Monasticism’. This founding framework for The Grace Network is inspired by George Lings’ book Seven Sacred Spaces that identifies seven spaces in traditional monasteries that can find alternative spaces and expressions in other settings: cell (being alone with God), chapel (corporate worship), chapter house (making decisions), cloister (planned and surprising meetings), garden (the place of work), refectory (food and hospitality) and library (study and sharing knowledge).

I’ve tried to capture a glimpse of a couple of these spaces in the photos above and below; but more important is the way that they are woven subtly into the life of Social Enterprise structured by grace and friendship. Here is church serving a project without drawing attention to itself; a true ‘fraternity’ of life, rather than a ‘kingdom’ built around itself. As we celebrate the Feast of Christ the King and conclude another liturgical year with the final Sunday of the short ‘season of the Kingdom’ this coming weekend, The Grace Network has inspired me to ask, what kind of kingdom does Christ the King have us build; surely not one that looks like the church focussed only on itself and it’s own life. What was glorious about The Grace Network was the way in which the spaces and expressions of (new) monastic life were a kind of trellis around which so many beautiful and transformative expressions of life were growing. With no explicit expectation that those involved in any of the enterprises would be or become Christians the Network provides continued opportunity to rub up against Kingdom values being lived out, and glimpses of Kingdom living continually on offer in spaces for reflection and learning, and at tables and in workshops of friendship and belonging.

The Grace Network inspired all of us to think about what church might be for; and how we might offer ‘gracious spaces for life and community’ ever more widely and creatively. On their website The Grace Network acknowledge “We don’t try and do everything but instead trust that a little yeast can make an awful lot of bread rise.” To what, Jesus continues to ask, might we liken the kingdom of God?

It’s great news that the Diocese of Gloucester have now invested in The Grace Network to offer two new expressions of its life and principles in Cirencester and Gloucester. We might hope that the Grace will spill further south and find expression in our city too.

With prayer that we may also grow our networks of grace and life,