On being homeless, a book review 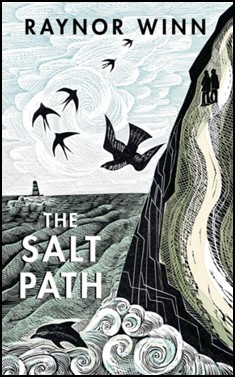 In 2013 Raynor Winn and her husband Moth lost their house.  The story is in the book she wrote four or so years later – The Salt Path. She and her book attracted a lot of attention when it was published in 2018.

She doesn’t say much about the house they lost but it was extra special because it was more or less a ruin when they took it on and renovated it. And it was the place where their children grew up. There are lots of hints that they always lived a bit on the edge – being generous and only doing the minimum of paper work when it had to be done. And having just enough money to live from day to day.

So when Moth lent money to a friend to help with a business project they  didn’t immediately have the right bit of paper to prove they weren’t liable for debts beyond the original loan. And they didn’t have money to pay lawyers.   So by the time the right piece of paper turned up it was too late and the judge gave judgement against them.  Their home was taken from them. And then a second blow – Moth had a degenerative condition which they were told would lead to being disabled and an early death.

They could have waited to be rehoused but they were not a high priority. They could have lapsed into complaints about how the law was fixed in  favour of the rich. But instead they decided to embark on the SW coast path. They had just enough money to buy a cheap tent and two thin sleeping bags, which were light enough for the two of them to carry. And they set off, rough camping,   living on very little.

On the way they found it better to say that they had sold their house: if they said they were homeless most people tended to edge away. Not surprising in a way. There are very few showers available to those camping rough and washing clothes took a low  priority so they looked and smelt like rough sleepers.  Even Lee Abbey didn’t welcome them.

But the other story – the one about selling their house got people excited about how brave they were. It took two summers to complete the walk. The winter was spent in a friends’ outhouse in exchange for doing it up (Moth had been a master plasterer). And the plan was for Moth to do a degree, which would at least give them access to a student loan. And then when the walk was nearly finished, a casual         conversation lead to them being offered a flat in Polruan.

I was left thinking how easy it is to find yourself homeless. And how frightened most of us are of that   possibility. And how the law has become even more skewed towards the rich since legal aid was           abolished. And how we tend to judge first and ask questions later, if at all. Christopher Richards

Jan Bartlett also contributed a passage from ‘The Salt Path’:

‘The public’s perception of the homeless immediately assumes drink, drugs and mental health issues, and prompts fear… So we had invented a lie that was more palatable. For them and for us… Only one word, but that in the public perception meant everything: ‘sold’. We could be homeless, having sold our home, and be inspirational. Or we could be homeless, having lost our home and become penniless, and be social pariahs.’