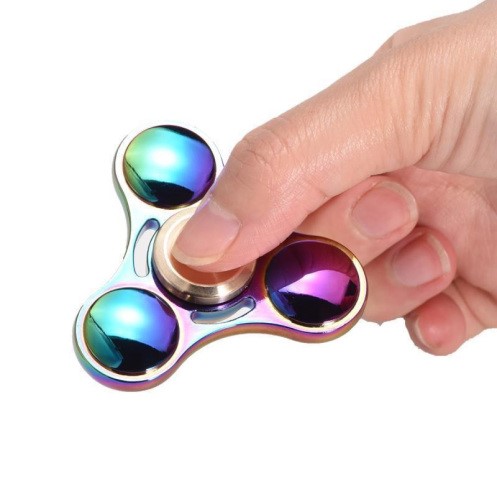 Can anyone tell me what this is? It was the teachers’ nightmare last year.

There were drawers full of confiscated fidget-spinners.

Last year, Pope Francis surprised the congregation during his homily at Trinity Sunday Mass, taking a fidget spinner from his pocket and using it to demonstrate the Trinity. “Just as St. Patrick used the three-leaf clover…..” he said, “I can use my aluminium Tri Fidget Spinner to reveal the mysteries of our God as Father, Son, and Holy Spirit. As the spinner spins faster, the three arms seem to become a single disc, yet they maintain their individuality. It is one, yet three, even when I do tricks with it, such as this hand transfer.”

A Vatican spokesman said that the pope had seen children and adults using the fidget spinners during his Wednesday audiences, and he ordered several through Amazon. “He’s fascinated by them, and right away, he saw the theological value in the Tri-Fidget Spinners. He’s taught himself numerous tricks and manoeuvres, and he’s working on coming up with a few of his own. He’s gotten quite a few Curia members hooked on them as well.”

The Pope explained that just as an improperly balanced spinner won’t work very well, our faith will falter if our view of God is likewise improperly balanced. “Could I execute a behind-the-back move like this, if my spinner was unbalanced? No, I tell you, no! It is the same if we don’t balance God equally as Father, Son, and Holy Spirit!”

If our view of God is improperly balanced. An improperly balanced God is a single self, isolated, solitary absolute Ego, unchangeable, all-determining. If God is all single and solitary, be a hermit. If God is cruel and haughty, be cruel and haughty. If God is the sort of oversexed, beer-swilling war-god of the Vikings, be like that. If the God we worship is the Solitary One who reigns in sovereign aloneness, we will arrive at a spirituality built on fear not love, on performance, not fellowship. It will be all about correct belief and behaviour—and make sure you get it right! – and we end up with the individualism of our culture and political programs like apartheid and ethnic cleansing, Nazism and Stalinism.

But we worship Father, Son and Holy Spirit, living in the togetherness of their mutual delight, passion and goodness, So a very different spirituality emerges. Annabel and the rest of us can learn to be vulnerable and authentic, to value relationships and beauty, to love, serve and give, to live with gratefulness and joy. We can stumble and fail and know we are still accepted.

The life of God is not dead uniformity.  There are differences within the living unity of God. God affirms distinct persons in relationship for the sake of community, friendship and mutual love. Friendship and love are given and received by those who are different, yet whose love binds them together without dissolving their differences.

Love is the most au­thentic mark of the Christian life, and love among humans,

or within God, requires community with others and a sharing of the deepest kind. The doctrine of the Trinity tells us of community and sharing in the life of God

A sharing in God’s life that begins in baptism. In our Second reading, Paul tells us that we become heirs of God. Paul uses the word adoption (υιοθεσια) Paul on Baptism: Theology, Mission and Ministry in Context by Nicholas Taylor

Roman adoption was serious. Because of Roman patria potestas – the father’s power over his family; of life and death. A Roman son never came of age; was always under the absolute possession of his father and under his absolute control. Adoption into another family was a very difficult and serious step.  In adoption, a person had to pass from one patria potestas to another; losing all rights in his old family and gaining all the rights of a legitimate son in his new family.  He got a new father, became heir to his new father’s estate- even if other sons were born afterwards. All debts were cancelled. He was regarded as a new person entering into a new life in which the past had no part. That is what Paul is thinking of.

He uses yet another picture from Roman adoption. He says that God’s spirit witnesses with our spirit that we really are his children. The Roman adoption ceremony was carried out in the presence of seven witnesses. So if the adopting father died and there was some dispute about the right of the adopted son to inherit, one or more of the seven witnesses stepped forward and swore that the adoption was genuine. Paul is saying, it is the Holy Spirit who is the witness to our adoption into the family of God.

Heirs do not grovel before intimidating powers but feel at home on the family estate, do not let anybody push them around, and joyfully obey in love the One whose love they have come to know.

In our gospel, Jesus told Nicodemus that he must be born again. In Jewish baptism (Mikveh) the rabbis refer to the waters as the womb of the world, So when a convert came out of the water he was referred to as “a little child just born” or “a child of one day” Yeb. 22a; 48b; 97b.

So Jesus was using a similar Jewish term: “born anew,” “born again,” “born from above.”

Maybe the rest of us need to be born again, buy our fidget spinners and annoy the hell out our parents.